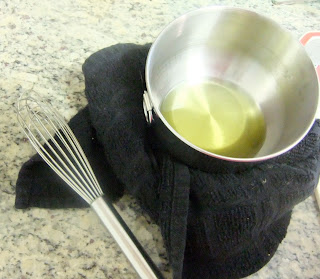 I have a confession.  I don’t buy commercial salad dressings or vinaigrettes. Not because they are expensive because when they go on sale, they are like 99 cents but because once I started making my own vinaigrettes and salad dressings, I couldn’t stop!  AND sure, if you do a comparison, 99 cents versus the pennies it costs to make a vinaigrette, it really is a no brainer.  It tastes fresher & cleaner atop salad greens, fish or legumes- it’s not that creamy, gloppy mess that you usually reach for.   But, the real reason why I love to make a vinaigrette is because I find the process of emulsification deeply satisfying.  I feel so fancy drizzling a steady, even stream of oil into my vinegar while whirling it around with my whisk.  IT’S SCIENCE, IT’S DELICIOUS!  I know, I’m a total dork, but anyway making your own dressing is really worth the effort, because really, it takes NO effort.  Once you know that the ratio for a classic vinaigrette is 3 parts oil to 1 part vinegar (or acid) the possibilities are endless. 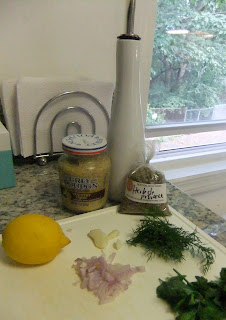 I don’t really measure my vinaigrettes, just eyeball the ratio and taste along the way to ensure proper seasoning.  Use whatever vinegar you have on hand add a tablespoon of Dijon mustard, add a squeeze of fresh lemon juice to brighten the flavor, be sure to season with salt & pepper and there you have a lovely traditional vinaigrette.  Some people will also add a bit of honey or sugar to sweeten the vinaigrette, but I leave that ingredient to your discretion. 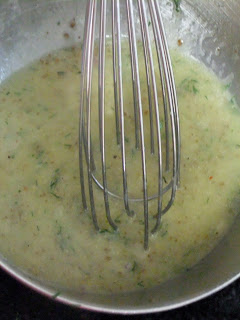 Since I’ve gotten into using fresh herbs whenever possible in my cooking, part of conundrum of buying fresh herbs inevitably becomes USING all of the fresh herbs.  I see this part of kitchen cooking to be a challenge in my eyes.  If I’ve purchased dill, thyme or even fresh rosemary, I will reach for whatever herbs I might have and throw those into my vinaigrette.  Many of your herbs can also be frozen in a cube tray with a little bit of water and saved for future use.  I’ll use a sesame oil as a base for Asian dressings with a little rice wine vinegar & honey, I’ll use orange juice instead of vinegar for a lovely citrus vinaigrette and dried herbs also can play really well here, so reach for your dill, smoked paprika, basil, thyme or whatever you might have and throw those in there too.  Some other additions I like to add- a clove of minced garlic, a bit of finely diced shallot, some diced tomato, diced capers, finely chopped anchovies (ooh you fancy!)- if you don’t think a chunky dressing is your thing, go ahead and throw it all into your food processor.  The point that I’m making here is that it is EASY once you figure it out, the possibilities are ENDLESS.  If you are still not feeling quite so confident with your vinaigrettes pick up one of these fun, mid-century looking dressing bottles. 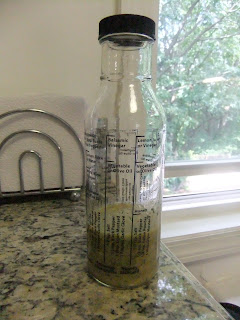 I got mine at Broadway Panhandler a few years ago, but a word of advice, just get it on Ebay or Amazon, it’s cheaper!   The ingredients and measurements are listed on the side of the bottle making it foolproof.  You want to get even easier, just dump all of your ingredients into a bottle, tighten the lid and just shake it up! Think we will only be using these for salads, think again- how about a nice marinade? The acid breaks down meat & tenderizes it OR how about a nice fresh citrus dressing for your fish dish? Go forth and try out some homemade vinaigrettes, you will not be sorry, your life will be simpler, tastier and maybe you will save a few pennies along the way.
Super Fresh Tomato Vinaigrette
Makes 4 servings
Can be pureed like below or left chunky
Ingredients 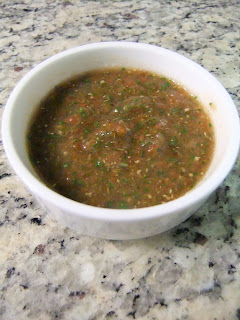 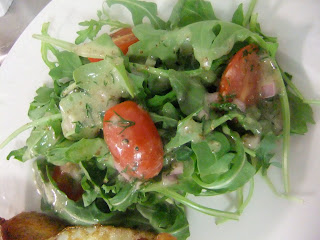 Since getting back from Europe I’ve yet to adjust to the time difference, as usual.  Depressingly I woke up at 5:30am this morning and after sitting in the dark drinking my coffee, petting my cats and catching up on a few days of missed television shows, I decided to be productive and do my grocery shopping early, so as not to fill my WHOLE weekend with chores. The first outpost of the national chain grocery store, Trader Joe’s opened up in Staten Island yesterday.  Supposedly there were massive crowds and good amount of chaos surrounding the opening.  After checking online, I saw that TJ’s opened their doors at 8am! So guess what? I got dressed and headed down, considering that I came home from my trip to an empty fridge, I really did need to pick up groceries anyway.
Trader Joe’s is a company that established itself in the late 1950’s originally under the name Pronto Markets and in 1967 founder Joe Coulombe expanded the chain, gave the employees their signature Hawaiian shirts and developed the concept for the TJ’s you see today.  So what makes TJ’s different you ask? Basically TJ’s has established a system of cutting out the middle man, buying products directly from suppliers which allows the store to sell goods to us at lower prices.
The store on Staten Island is located at 2385 Richmond Avenue on a corner where there formerly was a car dealership. While the supermarket is not hugely large, there was ample parking both in front and behind the store. 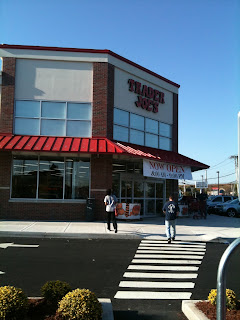 Frozen falafel, chicken tikka masala, gourmet chicken meatballs, packages of stir fry vegetables, pre-chopped mirepoix, nuts in bulk, chili lime chicken burgers, individual vacuum sealed frozen seafood, if any of this indicates something to you it should be that Trader Joe’s is about convenience. Pre-prepared foods run the gamut here and it seems that the store ultimately is catering to a customer that is short on time! Not particularly known for its quality produce, I really skipped that section all together and explored the other parts of the store. Right off the bat, the cheese and dairy section impressed me, the frozen foods section was great. 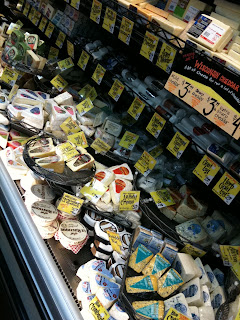 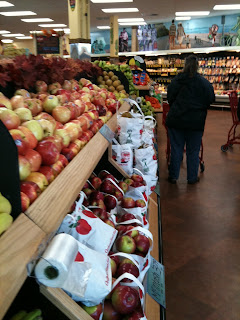 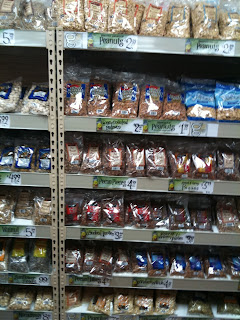 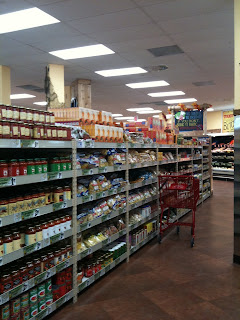 I came home with many of the above mentioned plus some chicken tenders in curry sauce, multi-grain pita chips, roasted wasabi seaweed snacks $1, freeze dried mango, Bite Sized Everything Crackers, TJ’s New Orleans Style Chicory Coffee, Creamy Toscano Cheese dusted with Cinnamon.  I did NOT spot the two-buck chuck so no cheap wine for us Staten Island and the beer section seemed just okay, I’ve seen better micro-brew selections at Top Tomato down on Bay Street.  The staff was very friendly, the check out process fast and the whole experience generally pain free! So far out of what I purchased and tried, the hummus was excellent, as were the pita chips and seaweed snacks (that might not be your thing though).  I’m happy to see some new retailers on the Staten Island grocery scene and welcome the alternative.  Go check it out when you get the chance and let me know what you think!
Posted by Denise at 3:16 PM 3 comments: