So, the annual Vendy Awards were held yesterday at Governor’s Island.  We happened to luck out with the weather, because it looked kind of ominous out there. It was hot, it was humid, but the rain stayed away and for that I am grateful.  If you are unaware of what the Vendy Awards are I will explain.  The Street Vendor Project is a member’s only, non-profit organization that regularly rallies for street vendor’s rights, provides information on things like permits, their legal rights, aids with dispute mediation and generally provides an organizational format for the street vendors to share in their battles against the city or help each other out when needed. The truth is that there are over 10,000 street vendors in New York City and these guys are the true small business owners. Vendors are regular guys with families that live and GIVE life to our city.  Do you have a memory of Christmas in New York without roasted chestnuts or peanuts? Would New York be the same if there weren’t “dirty water dogs” or perhaps you might recall several trips to SoHo or the Lower East Side, many drinks later and A MUCH needed stop for Halal meat at 3am.   Would Breakfast at Tiffany’s be BREAKFAST without Holly Golightly’s coffee cup?  As a lifelong New Yorker I can say that street vendors are a permanent fixture of our urban landscape.  I want these guys there & personally I will always support them.  I prefer coffee from my local coffee cart guy to Starbucks, I buy fruit from the Eastern European woman on 53rd who loves when I might accidentally give her foreign change (apparently she collects it) and a few days a week I’ll be on line for shawarma or Halal food.  Everyone goes above and beyond, they know how I take my coffee, they ask me how my day is going and they don’t care when I’m 25 cents short because they know I’ll overtip them a day later.  These guys work hard- up EARLY in the morning and are there rain, snow or shine, god bless them!!  So, for the Street Vendor Project, The Vendy Awards is the celebration of the best food that these sidewalk chefs and street vendors can offer.
This year 22 vendors competed in the categories of: The Vendy Cup, Rookie, Best of NJ & Dessert.  We got to Governor’s Island via the Atlantic Avenue ferry in Brooklyn which was a quick five minute ferry ride.  Entry to the Awards was fast and very organized- once they checked our ID’s and tickets and we got our “Over 21” wristbands we were ready to EAT.  We had a strategy that really worked to our advantage, while everyone was at the front, we headed towards the back where there were virtually NO lines! We headed straight to Tamales Guadalupe, a vendor serving up traditional Mexican tamales wrapped in corn husks. I chose a tamale verde with chicken and Jeff got a rojo (red).  Guadalupe Galicia is a single mom with two children and this is her primary source of income.  Watch her video here—
The tamales were great and she also served up some nice rice pudding which was delicious with lots of Mexican cinnamon and nutmeg.  While IN LINE for the tamales the guy ahead of me seemed to be eating some kind of delicious looking braised beef.  I had to ask where THAT came from and he pointed to the Sunrise Grill which was right across the way.  Sunrise Grill is a truck that usually hangs out on 168th Street, serving up traditional Jamaican food. 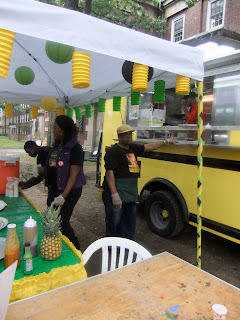 Man, was I excited! This food looked fantastic! I opted for a nice braised oxtail with greens and red beans and rice and Jeff got the curry goat. AMAZING. The oxtail was braised to perfection, soft and delicious made with a nice blend of spices. There were also pieces of fruit cake available, which I went back for seconds of- dark, moist, without the candied fruit which you typically associate with fruit cake and a nice spiced rum flavor- SO GOOD. We ate on!!!
Taim Mobile Falafel Truck, known for their fresh falafel and homemade blended sauces, served up decent portions of falafel pitas with yummy herbed sauces which we put down easily. 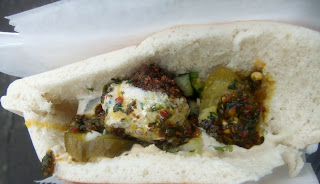 Comme Ci Comme Ca, my usual Mediterranean/Moroccan food truck fave was there, dishing out their cous cous & merguez, Korilla BBQ (of Food Network’s The Great Food Truck Race) and many, MANY others that I won’t get into specifics about. 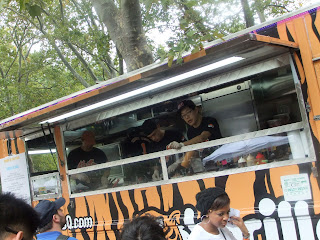 They were all excellent.  After more than a few spicy dishes, for dessert we went straight to LaNewYorkina where owner Fany Gerson (seen below), known for her delicious frozen paletas (popsicles) was handing out a nice selection of her well-known pops- white sangria, pineapple jalapeno, horchata, café con leche, cajeta with pecans. 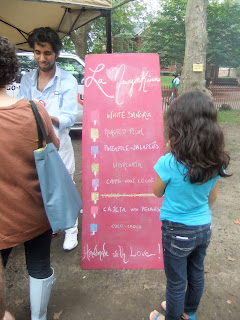 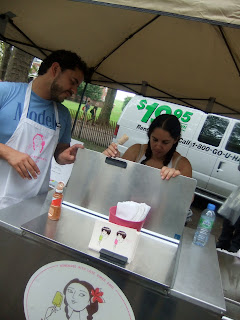 I’m actually a huge fan of Fany’s and own her recipe book, Paletas.  The mini paletas did not disappoint! The cajeta (made with a goat’s milk caramel) was rich and creamy offset by the delicious crunchy, saltiness of the pecans.  Jeff had the white sangria that also kicked ass, albeit in a fruity, tangy & citrus-y way.  We also tried some of the shaved ice dessert from Woolys, which I had never tried or witnessed the making of! The Wooly’s guys had these huge blocks of flavored green tea infused ice which got shaved into light flaky bits by these interesting contraptions. 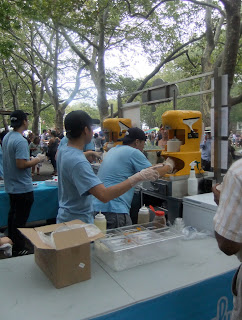 In the Best of NJ category was a truck called the Cinnamon Snail. Operated by some guys in some silly ass uniforms (they know it too), they served up one of the most delicious donuts I have ever tried. This donut was light, puffed up to perfection, with a carmelized Maker’s Mark sauce on top and creamy filling inside. 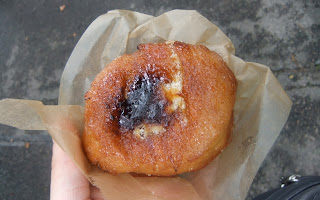 The guys working there, while silly, were super friendly, more in on the joke, “service with a smile…and a laugh” and I definitely appreciated it. These guys are based in Hoboken and I would be up for trying out MORE of their food if the donut was any indication of the high quality ingredients they use. 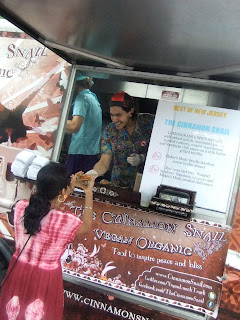 What else? An open bar, with a sponsor by Brooklyn Brewery, some wines, water, & kombucha (of course). The voting booth, some merchandise, everything was not too crowded, with lots of seating room & live music.  Overall the Vendy Awards were a great experience, and one I’ll gladly, happily support again next year.  Congrats to the winners;  Solber Pupusas (Vendy Cup),  Korilla BBQ (Rookie Vendor of the Year), Woolys (Best Dessert),  Cinnamon Swirl (The Maker’s Mark Street Food Challenge- FOR THAT DONUT!) & The Taco Truck (Best of NJ).  Follow your faves on Twitter and see where they might be near you!
Posted by Denise at 11:32 AM